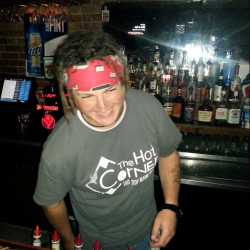 Brandon graduated with a bachelor's degree in marketing from Marshall University. Despite spending the vast majority of his 20s heavily under the influence of alcohol, and the far heavier burden of negativity, he was able to successfully co-found a non-profit organization with the broad mission of alleviating the numerous social issues associated with poverty in Huntington, WV. Acting on his need for real learning and experience he left home in 2013, and is currently enjoying life on the road: wherever that may lead.

Do you feel it? The change sweeping across the world; do you feel it? Every day we see or hear friends beginning to wake up from their long, apathy induced naps. People are encouraged daily to hit the snooze button. However, this particular snooze button is not delaying you from some subservient “job” or standing in line for hours to consume overpriced eggs benedict. This snooze button is one that aids in delaying the progression of humanity. Not the illusory advancement people usually think of when they hear the word “progress,” but an actual step forward in the development of human beings – a step toward our individual and collective freedom.

The human race is waking up to the fact that nearly every single idea it has been taught is false. Almost everything people think they know has been maliciously transplanted into their minds via the corrupt educational system, governmental agencies, and the corporations that stand to profit from the perceived impotence of the average person. The main media outlets are not required to tell you the truth. Therefore, they will report on whatever their owners want, with whatever slant or bias is best received by the targeted audience.

There are several reasons that most people are incapable of forming an original thought. One enormous factor is that they have never been taught to think for themselves. This is hardly even a subject for debate. Take a step back and look at the current system of education used in the United States. Children are not encouraged to think critically. They are required to swallow force fed information and regurgitate it on testing day. John D. Rockefeller is reportedly quoted as saying, “I don’t want a nation of thinkers. I want a nation of workers.” While this is debated by some corporate apologists, and John D. Rockefeller’s personal Wikiquotes page, it is not debatable that the Rockefeller and Carnegie Foundations donated large sums of money to the National Education Association (NEA). Rockefeller was also responsible for funding “heavily slanted” textbooks that were spread far and wide by the NEA [1]. With these extreme conflicts of interest, is it not fair for people to at least question what they have been taught?

These are just a few excerpts, indicative of the culture surrounding censorship, from Joan DelFattore’s book titled “What Johnny Shouldn’t Read: Textbook Censorship in America.”

“‘From a business standpoint, self-censorship makes sense. First, the practice represents an attempt to please the widest possible audience and to insure a wide distribution of texts. Second, the practice avoids the possibility of challenges, costly litigation and adverse publicity.’” [2]

“‘Several [textbook publishers] wrote to me that they had experienced no censorship problems; a few of them were the subjects of bitter bills of particulars in Texas, for example, and had lost thousands of dollars in sales. Apparently those publishers did not want to admit to censorship pressures in fear of losing more sales. Other publishers indicated that the censors would whitewash all textbooks if they could.’” [2]

“Eliminating racism and sexism from our culture is a worthy goal in itself, but omitting and expurgating all mention of past attitudes falsifies history, waters down literature, and does nothing to guarantee future improvements.” [2]

Several interesting quotes surfaced while researching information for this article. These quotes come from people who were massively influential in creating the education system that we adhere to today.

In 1933 the president of the Rockefeller Foundation, Max Mason, states, “[The Rockefeller Foundation’s policies] were directed to the general problem of human behavior, with the aim of control through understanding. The Social sciences, for example, will concern themselves with the rationalization of social control; the Media and Natural sciences propose a closely coordinated study of sciences which underlie personal understanding and personal control.” [3]

This clearly states that there has been a coordinated effort to control human behavior through education. It also raises questions about who stands to benefit from controlling the “problem” of human behavior.

William Seawell, a professor of education at the University of Virginia said, “Public schools promote civic rather than individual pursuits… We must focus on creating citizens for the good of society… Each child belongs to the state.” [4] This statement was made in 1981.

Again, one might infer that there is some guiding hand molding people into what has been deemed acceptable for society. To which body is the guiding hand attached? To whom would it be beneficial for an entire population to be educated in a particular, narrow fashion?

Frederick T. Gates, business advisor to John D. Rockefeller, boldly proclaims in 1913, “In our dream we have limitless resources, and the people yield themselves with perfect docility to our molding hand. The present educational conventions fade from our minds; and, unhampered by tradition, we work our own good will upon a grateful and responsive rural folk. We shall not try to make these people or any of their children into philosophers or men of learning or of science. We are not to raise up among them authors, orators, poets, or men of letters. We shall not search for embryo great artists, painters, musicians. Nor will we cherish even the humbler ambition to raise up from among them lawyers, doctors, preachers, statesmen, of whom we now have ample supply.” [5]

This is quite contrary to the traditional view of the “American dream.” Why should this small group of people be in charge of determining whether others are allowed to pursue musical or artistic interests?  Who are they to sculpt public education in a manner that does not encourage people to write or even think? How free can your choice be when the wealthiest people on the planet have decided that there is already “ample supply” of politicians, lawyers, and preachers? Furthermore, are we to simply trust that these people have the interests of the majority in mind when they make these decisions?

There have been numerous whistleblowers who have gone out of their way in attempt to inform the public, but as people become disillusioned they, too often, look the other way.

“The goal of these wealthy families and their foundations—a seamless non-competitive global system for commerce and trade—when stripped of flowery expressions of concern for minorities, the less fortunate, etc., represented the initial stage of what this author now refers to as the deliberate dumbing down of america.” This from Charlotte Thomson Iserbyt’s “The Dumbing Down of America.” [6]

Again, Iserbyt states, “The mind of the average American became “trained” (conditioned) to accept the idea that education exists solely for the purpose of getting a good paying job in the global workforce economy.” [6]

O.A. Nelson, former assistant principal at Wilson High School (Minneapolis, MN) and Johnson High School (St. John, MN) openly admits, “The sole work of the group was to destroy our schools! We spent one hour and forty-five minutes discussing the so-called “Modern Math.” At one point I objected because there was too much memory work, and math is reasoning; not memory. Dr. Ziegler turned to me and said, “Nelson, wake up! That is what we want… a math that the pupils cannot apply to life situations when they get out of school!” That math was not introduced until much later, as those present thought it was too radical a change. A milder course by Dr. Breckner was substituted but it was also worthless, as far as understanding math was concerned.” [7] [8]

At this point, it should go without saying that the United States is not the most educated of the “civilized” nations. Honestly, it is not even close, and it is also not debatable.

In May 2015 Sean Coughlan, education correspondent for the BBC, published an article showing the United States ranking 28th out of 76 countries in the fields of math and science. [9]

As if this were not enough, kids are, knowingly or unknowingly, given toxic, fluoridated water to wash down the poisonous, pesticide laden, genetically modified foods they are rationed by the public school system. Since fluoride has now been deemed a neurotoxin on par with “lead, mercury, and arsenic” [12] one could deduce that the poisoning of people’s brains is not only allowed by the government, but even propagated under the pretense that it is “good for teeth.” Combine all this with massively over prescribed stimulants such as Ritalin and Adderall [13], and you have a cocktail capable of destroying even the most promising of minds.

The immediate blame could easily be passed onto the media for failing to keep people informed. That is fair. It is, in theory, what the media is supposed to do. However,the proposal of this article is slightly different. What if it is our fault that all this was allowed to happen? What if it is we who are to blame for our own densification? In this proposed case there is hope! There is hope because if we were the ones who caused the debacle then we, too, are the ones capable of fixing it.

By admitting the problem is one of our own creation we can move forward with a solution. That solution is to become aware of our power. If people could find the strength to peel themselves off the sheets and wake up, then they would realize how significant they are. This will come as a shock to many, and ridiculed by others, but that is only because we have been conditioned to believe that we are miniscule, insignificant creatures. We are programmed to believe that we have no power, no influence. However, the opposite is true. We hold all the power. Stop buying garbage food that is devoid of nutritional value. Stop labeling yourself and identifying with characters in reality TV shows that are cleverly titled “Presidential Elections.” Realize that it is by design that we are constantly distracted and busy. Realize that is by design that we feel separate from one another and nature. Stop poisoning yourself, your family, your friends with toxic chemicals, food, and ideas.

No one can tell you how all this will work, and that’s the point. This life belongs to you and you alone. You must take control of your own life and start living in a way that you feel is right, and not just the way you’ve been taught is right. All we have to do is stop participating in the system of our of own demise.

My proposal is not one of violent revolution or warfare. That which you fight you give power. My proposal is one of noncompliance. As soon as we stop participating in the destruction of our bodies and our planet we can begin taking steps in the right direction. When we, as a collective, decide to start thinking for ourselves, educating ourselves, and taking responsibility for our own lives, then we can truly take the power back. My wish is for human beings to feel responsible because with responsibility comes empowerment.